Testing out some new Sharpie markers (Brush Tip markers) and color matching the different nibs associated with each color (chisel  vs. fine vs brush vs ulta fine tips). 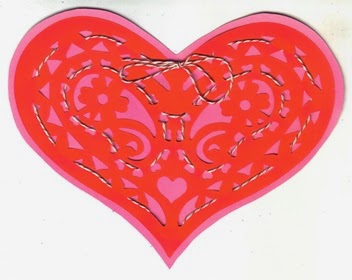 It seems to be the easy challenges that always trip me up. This Iron Craft Challenge was dedicated to string. Once again, I tried to make a friendship bracelet and couldn't even make the simplest version. So I decided to look through my craft supplies and found these paper doilies left over from Valentine's Day.

I took red and white Baker's Twine and threaded it through some of the openings to give it some dimension. i then mounted it onto pink card stock and then cut around the shape. While it isn't perfect, I will use a similar technique in the future. I will mount it onto a folded card base and print a greeting on the inside--something like : You hold the strings to my heart.

I was going to add another layer of doodles on top of this background but I liked the background so much, I just stopped.

I was talking with someone the other day regarding old time crafts and it made me reminisce about earlier days when I started to realize that I loved to craft/create. My two favorite gifts were my Spirograph and my Candle Maker.

The Spirograph had been in my family for awhile and I never saw one until I was adopted into my family. When I started to use it, I fell in love. I would play with the set endlessly for hours. I even had a little journal that I would draw every single pattern--one pattern per page--and would meticulously notate which wheel/spool, which circle and which hole that I would use to create each design.

First, it was a modern miracle that all of the pieces were still intact. The set had been stored in the attic and was only found when we were digging out the Christmas decorations. This is the ONLY toy that I still carry with me wherever I go and has traveled with me everywhere.

The second toy from my childhood that I remember was a Candle Making Set. I loved candles and I enjoyed making them ever since I made one for an art project in high school. I took a parfait glass and layered candle wax to similar a Strawberry Sundae. That Christmas, I had pined for a Candle Making Set and thought that my dreams were going to be crushed by not receiving one. One night when everyone was asleep, I unwrapped all of my presents under the tree to find my "surprise." I rewrapped all of my gifts using the same paper and same tape (which is where I learned to love gift wrapping as well). On Christmas Day, I held up the package (using my best acting skills) and said--I hope this is a Candle Making Set. Boy, was I "surprised" when it was.

I don't know whatever happened to my Candle Making Set but I still have my Spirograph.
Posted by Dr. Russ at 11:54 AM No comments: 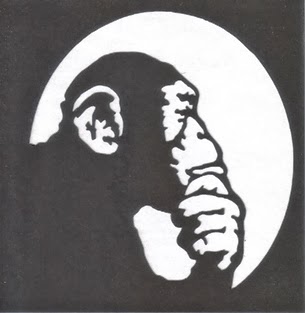 Iron Craft Challenge #5 was brought to us by Sesame Street and the Letter "A" or so it seemed. At least for me, it felt like an episode because I must have gone through every word that began with the Letter A. I really struggled with this challenge because it has been a very hectic week because I started working at the theater (at nights) so I am still getting used to working both jobs and fitting in all of the blog work and crafting.

This is a cutout card design that I have been saving for a while. It is originally a pumpkin carving design from Stoneykins.com. The original thought was for me to cut the stencil and then make a t-shirt out of it. When I first saw it, I thought it was a monkey but I was corrected by a friend and was told it was an ape. I said but it looks like a chimpanzee and he said--Exactly. Apparently, chimps are apes and no one told me. So my "thinking chimp" card really is a "thinking ape" card and therefore qualifies for the Letter A challenge.

Now, I just have to find an occasion to give the card to someone.
Posted by Dr. Russ at 12:30 AM 2 comments: 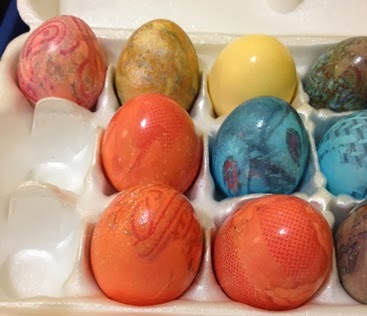 This year, I wanted to share some new techniques for Egg Decorating. These will be new techniques for me and I will share the prototypes and finished projects with you. The first technique is Silk Egg Dyeing. It is a hot dyeing process and requires that you use 100% silk for the process.  This technique was made famous by using old silk neckties.

So, for the prototypes, I used some old silk ties that were being discarded at a local Salvation Army. Since the ties were so out of style, the manager gave them to me. She told me that she got tired of having them around and only be used for Halloween or 70s costume parties. One of the ties that she gave me has been bought and re-donated twelve times.

For the prototypes, I decided to use raw chicken eggs (as opposed to blown out eggs). For the final project, I will use blown out eggs. I will share a tutorial with you later this week but wanted to show you some of the finished prototypes.

As you can see, only some of the pattern transfers. Regardless of how hard I tried to get the fabric to lie flat against the egg, I still got white or missing patterns. Once I tried and failed on this single issue, I just decided to embrace the imperfections as part of the process. To lessen the effects of this lack of transfer, I decided to overdye the eggs with standard cold dyeing techniques. Afterwards, I really like the way the eggs turned out. I tried to overdye with a coordinating color.

In the detail photos below, you can see the pattern transfer on each of the eggs.


I am especially proud of the brown eggs (which is an extremely difficult color to achieve without it looking like mud). I learned another interesting technique this year as well--the sheen on the eggs is a thin coat of vegetable oil.

As mentioned above, I will share the tutorial later this week and will share more final results.

After some new calculations, I decided to attempt this project again. Rather than use book cloth, I decided to use some scrap paper that I had. I have presented this paper before on the blog; it is a paper backed treated paper that is embossed with a reptile design.

For this prototype, I decided to keep the corners square rather that try and cover the rounded corners. The boards were kept the same size but the gap between the boards was increased to 1/2 inch rather than the 1/4 inch used previously. Usually, the gap should equal the thickness of the pages (signature). Yet, for this project, the extra width was needed.

After gluing everything in, the adjustments seemed to work well. The case was not warping and there seemed to be less strain on the hinge due to the added width and added length. The only step left was adding end sheets. I decided to use some left over marbled paper that I had.

I was really pleased with the way that this version turned out. There are still some small modifications needed but I think I am able to proceed to the leather version.

One of my bosses uses a pocket notebook. He uses his notebook to make notations about things that he doesn't want to forget. I have always admired him because if he writes it in his notebook, he gets things done or gets answers. I decided that I wanted to give him an Opening Night gift of a set of Moleskin Cahier notebooks and a portfolio to hold his notebook. This was my first attempt. AND--it was a major FAIL.

First, I cut the boards to size. I also decided to round the corners of the boards to mimic the rounded corners of the notebook. The structure that I decided to use was a hard case pamphlet style book. Rather than sew the signatures into the hinge, I will sew a piece of elastic into the hinge so the notebook can slide under the elastic band to hold the notebook in place. The width of the gap between the two boards was measured to be 1/4 inch.
For the hinge, I used a piece of elastic that was sewn to the hinge on the underside and then wrapped around the top and bottom edges. The height of the hinge was the same length of the boards less the amount of the turn ins (less 1.5 inches for 3/4 inch turn ins).

Once everything was glued in, I realized many of my mistakes. The corners were cut too tight to accommodate the rounded corners.

The hinge was too short. While the notebook fit, there was too much pressure on the hinge and the it started to pull away from the book boards.

The elastic going over the top and bottom of the hinge didn't work either and caused the boards to warp.

Finally, the width of the gap wasn't sufficient for the book to close.


So back to the drawing board to figure things out. Another prototype is needed.