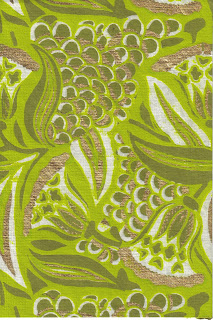 Olive is a color that I don't particular use in any of my color palettes. While the scan on my computer shows it a little hotter (more lime-ish) than it really is, this paper is a thick paper from India that uses the colors olive, white and gold. The beauty of this paper is the fact that it does truly shimmer with the gold highlights. The downside of this paper (as with many of the Indian papers that I have) is that it curls like crazy. More importantly, it stretches in both directions. Primarily, I now us it for for paper covers for soft-covered pamphlet books.
Posted by Dr. Russ at 8:00 AM No comments:

This is a card that I am working on for Christmas 2010. As I have said before, I am not a big fan of square cards but this one works for me. I am still trying to work out the final dimensions of the branches in the top left corner. I will put it away so that I can work on other things and come back to it with fresher eyes.

So, that is all that I have for holiday cutouts. I will be sharing Valentine's cutouts soon.

Tommorrow, I hope to return to Paper Fridays. 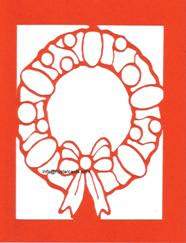 This card was developed from a sticker series as was yesterday's card. The white background is a paper liner that becomes the writing surface of the card. It is a piece of linen text weight paper that is folded in half and then glued to the inside of the back leaf of the card.
Posted by Dr. Russ at 8:00 AM 1 comment:

Here is another Christmas card cutout that was for the 2009 season. It was developed from a series of stickers. This is an A7 sized card.

Here is cutout that I designed for 2009 Christmas cards. I am not generally a fan of square cards because of the postage so I will adapt this to a reguarl sized A2 card. This was adapted from an old German cutout. 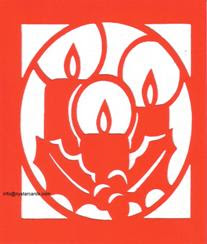 Here is the first of a series of cutouts that I will be sharing online. Forgive me if I am a little gun shy about doing so, but you can't move forward until you forget about the past.


This is a cut out that was adapted from Dover's Chinese Cut-Paper Designs. I am using it for a series of Year of the Tiger (the year 2010) projects that I am doing. Here is the cutout and I will share the final projects with you later. 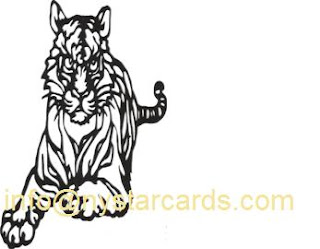 Not Lost. . . unless you consider my mess

First of all, I want to thank you for all of your support during my legal quagmire. I was having a difficult time trying to still focus on the projects that were due, the legal commitments, and working at my regular jobs.

I am in full swing trying to get ready for Valentine's Day. I got behind and will sell fewer items this year but I don't mind. I still have many ideas that I will carry over until next year so I am not worried.

The biggest complaint that I have right now is that my apartment and my studio (the extra room) are a total mess. I have piles of everything spread around just waiting to be put away. It is driving me crazy but I can't get to it until the weekend. I have some wedding commissions that I need to work on and I refuse to do so until I get the studio and apartment cleaned.

I promise that this weekend I will post some pictures of projects that are in progress. I simply need to get organized to be able to do so.

Once again, thank you for all of your support.

The Ordeal is finally over

Well, I am glad to say that the legal ordeal with Mr. steal-my-designs is finally over. I am very happy to say that I won the case and the settlement will probably put the "thief" out of business--I am not gloating, but merely stating a fact.

I was awarded the maximum amount of damages in such a case AND Mr. Thief also has to pay my legal fees (including my attorney's fees). Literally, this will put the person out of business since he doesn't have the money to pay the damages/fees.

Mr. I-didn't-think-you-would-take-me-to court erred on a variety of different levels:

I really don't mean to sound like I am gloating about this. I believe that I was nice to the person and gave him every opportunity to correct the situation. The person really didn't believe that I would take this issue as far as I did. In other words, he simply underestimated me and my belief in doing what is right.

So, please continue to visit for some new designs of things I was doing while this was going on.

Thanks to all of you for your support during this crazy time.