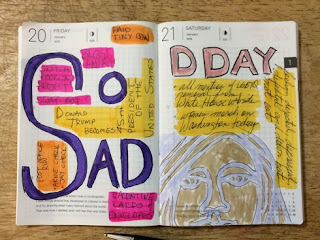 I received a Hobonichi Techo 2017 as a gift. I received it on 20 January after a mail forwarding fiasco from December. It was a heartfelt gift given to me by someone but I really didn't know what to do with it. For some reason, I thought the journal was going to be a different size. The size is an A6 journal which is about 4 by 5.5 inches.

There are a variety of Pinterest and Instagram hashtags regarding this journal. I decided to fall through the rabbit hole to try and find some inspiration. The pages work well with pens, fountain pens, and  Tombow markers without too much bleed through. It does not work well with Sharpie markers because of the bleed through.

These past two days feature the inauguration and its aftermath. 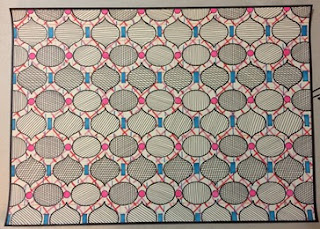 The overall size of each sheet will is 14 by 19 inches. The page will be folded from top to bottom once. The page will then be folded twice toward the center. Therefore, each page in its folded form will be 4.75 by 7 inches.
Posted by Dr. Russ at 8:38 PM No comments:

Happy New Year. I am still recovering from the absence of the Iron Craft Challenges. I decided to find other avenues to fill the gap. I have signed up for The Sketchbook Project for 2017. I have two ideas and I might do two different journals. The journals are due March 31, 2017 so I still have plenty of time. The first project is a recreation of some of the hand lettered inspirational quotes from last year. I got through six months of daily quotes. This year, I might finish the project as well. The project would be a re-visit to some of the quotes and recreate them in the journal they send. The second idea is a series of fold out pages that will be large doodles using repetitive patterns. One of the themes for this year is repetitive patterns.

Another Iron Craft void filler is a revisit to swap-bot challenges. In these challenges, you swap out projects based on curated and moderated themes. You can sign up for the ones in which you want to participate. I am looking at the different paper swaps--envelopes, post cards, journals, etc.

The first one that I am participating is a post card challenge called D is for ____ Postcard swap. These challenges aren't always handmade items although I will be doing all handmade projects. For this challenge, I was assigned three partners. I decided to do three separate postcards based on a daisy. Each of the cards is based on a daisy stencil that I have.

The first card is a single daisy on a alcohol background. 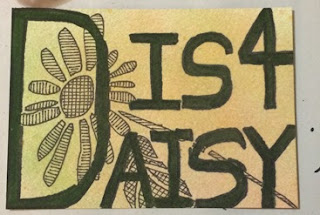 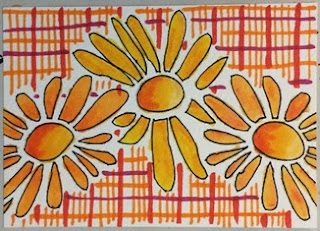 The third card is the same group of daisies but everything was colored using alcohol inks. The black outline was done after the inks dried. First, the daisies were stenciled using the inks. Second, the background was filled in by ovespraying the entire card with alcohol inks. Once the card was drying, the stencil was put over the daisies and the black outline was drawn using a fine tip Sharpie. 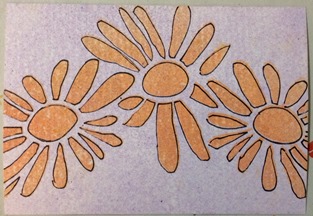 I hope that my swap partners like them.
Posted by Dr. Russ at 11:14 AM No comments: 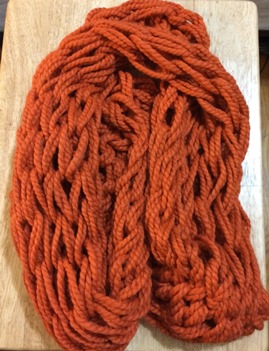 For our last challenge in 2016 and in general, I wanted to pay homage to Kat (and Susi) who had the forethought to create something spectacular called Iron Craft Challenges. I am happy to say that I have, once again, participated in all 26 challenges this year.

To pay tribute to Kat, I wanted to try and knit. Granted, I needed a project that I could complete in two weeks and I knew I wouldn't be able to properly knit something on needles (believe me, I have tried in the past). I did a quick search on You Tube for Infinity Scarf.  I found this video called Arm Knitting (this like will open another window on You Tube).

I had two skeins of orange bulky yarn that I was hoarding, so I decided to give it a try. The hardest part was keeping the tension consistent throughout the project. I did have to start over several times. I also had difficulty sewing the ends to finish the project.

I lost track of the number of rows and was too lazy to count them so I just "knitted" until I was finished. Granted, my scarf was a lot longer than anticipated but I didn't mind that because I hate feeling like I am choking when wearing a scarf. So my last Iron Craft photo will be me modeling my scarf. 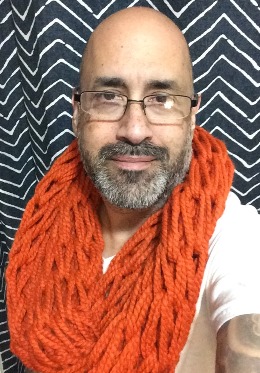 Thank you Kat and Susi for a wonderful platform to share our art (and crafts). I am forever blessed to have met such a supportive group of fellow artisans and crafters. Sending you love and well wishes for  all of your future endeavors and a art/craft-filled 2017.
Posted by Dr. Russ at 11:48 AM 3 comments: