For Challenge 6, we were asked to create something with, or based on, Peeps. Unfortunately, after last year's challenge, I have an unnatural aversion to the texture of Peeps. I have never eaten a peep (either bunny or chick) nor do I have a desire to do so.
I knew that we would probably to an Easter based project but when I read that the most requested repeat challenge from last year was the Peeps challenge, I was floored.
After picking myself up from the dust covered floor, I decided that I would do a project based on Peeps. I thought about cooking a cake and decorating it like a Peep. Then, I thought about doing a felt Peep hand puppet but Captain Kangaroo already had a bunny puppet. So, I reached back into my comfortable bag of tricks and took out some pastel colored computer paper.
Here is what came out--a yellow bunny Peep. 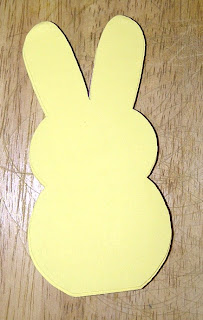 One thing led to another and there appeared more Peeps but in different colors:

I had all of these bunny Peeps and they seemed to be multiplying: 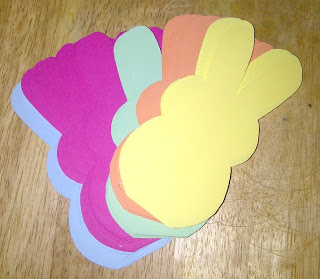 So, I had to do something with them-- 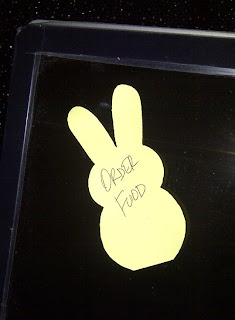 how about Bunny Peep PostIt notes!
Posted by Dr. Russ at 8:00 AM 2 comments:

This week was a crazy week because I started my night job at the theater again plus I was trying to finalize my Peeps project for Iron Craft challenge. Also, for some reason, I took on a more ambitious project for the box challenge so I was a little crazed this week.
This week for the box challenge, I wanted to create a non-traditional shaped box. This week, I decided to do a curved box-with a hinged lid--with an interior tray--with a divider. WOW. I just got tired typing that.
The difficulty with making a curved shape is that you have to wet the boards so that they will bend. Also, you have to work very symmetrically.
I decided to use some of the double sided paper that I love for the structure (this paper is purple on one side and white on the other). I also decided to use a tie-dyed mulberry paper for the interior tray.
Here is the outside of the box: 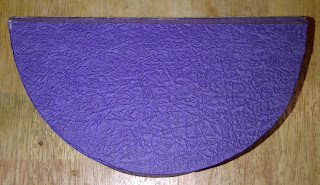 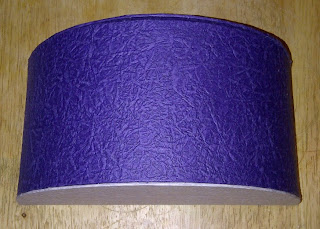 (l) top view of the box
(r) front view of the box
One of the problems with doing such an intricate structure is that rounded shapes are harder to fit and harder to glue. Also, the lid has to match the base, the interior liner has to match the shape and dimension of the opening of the box and the tray, etc. Like sewing, curved surfaces have to be cut in a fringe-like fashion so they will cover the rounded surface. 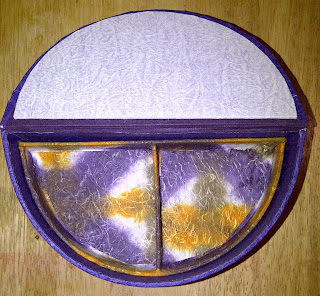 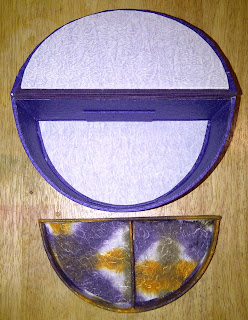 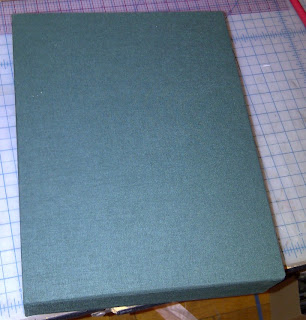 This week's box challenge is a little bit of a cheat. I used box making techniques but instead of a standard box, I decided to make a slip case. A slip case is a very important model to learn to master because they can be so useful in protecting books or for using as a gift presentation.
The problem with making a GOOD slipcase is that there is a lot of pre-planning that needs to happen. First, you must line the inside of the box before assembling it. In my case, I went with a blue Canson paper. Because the boards can warp while drying, you must also line the outside of the box so that it dries evenly. The outside lining can be any waste paper that you have since it will be covered with the book cloth. In my case, I simply used newsprint. The problem with lining boards is that you must have an idea of how much board to line so that you don't waste board or paper. I usually will line an entire sheet of binder's board and will save the leftovers. The other problem is that it is much easier to cut the board once it is lined rather than line individual pieces.
Once you have your boards lined, you must cut and assemble your slipcase. This leads to another problem--you must be very careful in gluing your joints because excess glue will be seen as it discolors the liner paper.
Once you cover the box with book cloth, you are presented with a final problem--exposed turn-ins. Because your turn-ins will be exposed in the open end of the box, you must be exact in your cutting, gluing, and turning in. If your measurements are off in any direction, your turn-ins won't line up.

This week we were challenged to go to the 99 cent store and buy materials to inspire us to make a project. I knew exactly what I wanted to make this week. Last year Thing1 and Thing2 made this project. Rather than recover the front and back covers of the composition book, I decided to make new covers. Rather than use fabric for the covers, I decided to use paper that I would buy at the 99 cent store. The only materials that I used that weren't from the store was the thread (which was allowed) and book cloth (which I cheated and used scraps that cost less than 99 cents). 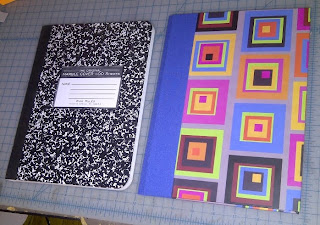 (above) The before and after shot
To do this project (I will have a step by step tutorial later), you need to cut two boards to cover. You also need two pieces of book cloth. One piece will act as the spine between the two boards and the other will act as the hinge that will connect the text block (the pages from the notebook) to the inside of the book. You also need two end sheets for the interior of the book.
Second, you must separate the pages from the original covers. This is easy to do since the manufacturers use a running stitch to connect everything. I use a big clip to keep the pages together. Using a piece of book cloth for a hinge, you then use a pamphlet stitch (I used a five-hole stitch) to connect the text block to the hinge.

(above) here is the text block sewn to the hinge.
The next step is to cut your coverings for the front and back boards. I used a large gift bag to use as a covering. While the material was a little difficult to work with (cheap materials usually are), I eventually used half of the bag for my purposes. 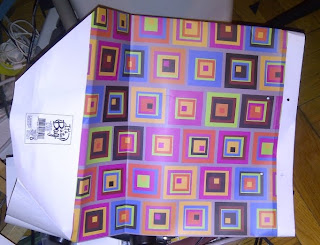 (above) the deconstruction of the gift bag. There
is still a lot of material that can be used.
Once everything was connected, all I had to do was use scrapbook paper for the end sheets. As luck would have it, there were no duplicates so I had to use coordinating paper. I thought that the juxtaposition of the circles on the interior fit well with the boxes on the exterior. 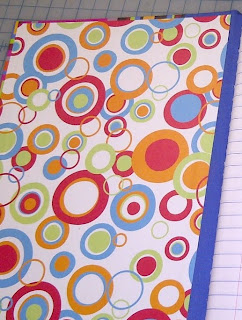 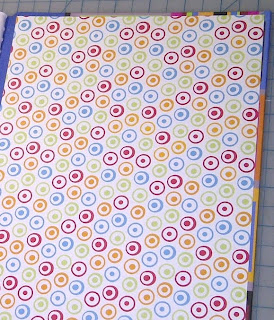 This week, I decided to make another box for my own use. I was under a time crunch because I procrastinated. First, I didn't know what I wanted to make (I have so many box ideas that I want to make that I have a hard time deciding exactly what to make each week). Secondly, I received news that I was chosen to exhibit a work(s) at the Louis Vuitton exhibit space in Tokyo during the 2012-2013 season. Here is a link to their current exhibit. Because of the good news, I think that I celebrated a little too much and should have concentrated on making this week's box. Having said that--We also lost an hour to Daylight Savings Time. 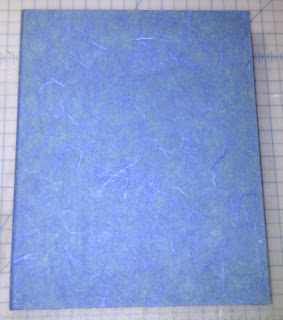 I know, I know. The box looks a little pedestrian on the outside. A tallish box with a thin spine. What could it be? The answer is that is a variation on a classic clamshell box. The clamshell box is comprised to two trays that are affixed to a hinged case. Here, I used a double sized Unryu paper from Thailand. The beauty of this paper is that it will usually stand the time of opening and closing in the joints so that you don't have to use book cloth for the hinges.
In January, we were challenged to make sleeves for an iPad or electronic reader here . So, I decided to make a box to hold my iPad. I know, you can buy cases to do the same thing but I wanted to be able to make my own. The Unryu paper is the blue/lime green combination. I decided to use the blue for the outside and the top tray so when the box is closed it looks as if the entire structure is blue. When you open the box, you see that the bottom tray and the hinge uses the lime green side. The lining papers are crayon decorated wax paper that was sealed. 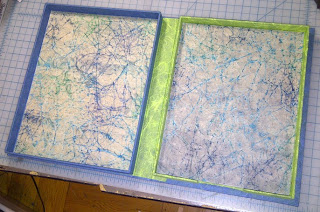 (above) The opened box
I wanted the box to seem as if nothing special was inside so that I wouldn't get mugged for my iPad. Also, when carrying my iPad in my bag or backpack, there is even an extra layer of protection which will provide very useful when traveling.

(above) The opened box with the hard case and smart cover.
I might have to color coordinate my smart cover with my new box but orange is my favorite color and I might have a hard time getting rid of it. 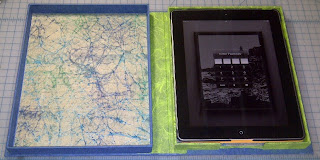 (above)--My iPad with the cover in back
One of the beauties of making an item yourself is that you can customize the item to your own tastes and liking. One variation of the clam shell box that I made is that the bottom tray has a cutout to allow the iPad to be charged while in the box. The top tray disguises that cutout when closed.
Posted by Dr. Russ at 12:00 PM 2 comments: