For Iron Craft Challenge12, we were tasked with making something for "HIM." The problem is that I am a HIM which meant that I needed to make something for myself--which I am never very good at doing. I struggled with this challenge because I really didn't need anything.

I thought about sharing an organizing option for my bow tie collection but that wasn't very creative or appropriate. I then thought about my cuff links and how I am always looking for a matching set. I decided to create a shallow box to hold my cuff links. The box will be next to my key tray so I can put the cuff links in the box before sending my shirts to the dry cleaner.

The box is covered with a handmade paper that is infused with flower petals and leaves. Because the paper is so thick it became very difficult to use. Also, because the paper is handmade, there was pilling when turning in the corners. Overall, I am very happy with the way that it turned out.

A good friend of mine is opening in a new musical based on the music of Tupac Shakur. The play is in previews and opens on June 19th. This is another variation of the stained glass card.  The card features a silhouette of Tupac on the front of the card.

The back of the card shows the title of the show and the date of Opening Night. There will be translucent vellum as the inside sheet. A battery operated tea light will be offered with the card. The card is pretty stunning when the lights are turned off and the tea light is on.

I don't know why I always associated hibiscus with the color purple. 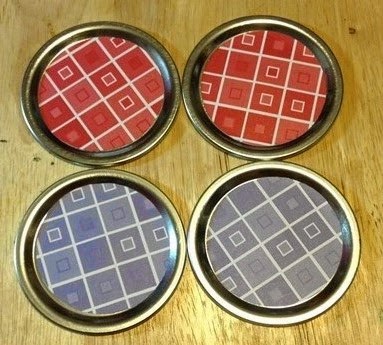 For this Iron Craft Challenge, we were asked to create something from the Dollar Store (or any store that had 99 cent items). I was in the Home Depot store in Manhattan and came across the clearance section of the store. I found these Kerr Canning Lids on sale for 99 cents. Both sizes were on sale for the same price. I didn't know what I wanted to do with them so I bought 15 sets in both sizes.

Two coincidences happened to help me create this project. One of my friends is having a hard time keeping her young children occupied and asked me if I could make them something. The older of the two children is 5 years old and getting ready for kindergarten. The other child is 3 1/2 years old.

The second coincidence that happened was I was notified Sr. Rita,one of the three last remaining nuns that worked in the orphanage where I was raised as a child, had died. So during this time frame I was remembering my time there.

One night, as I was trying to sleep, I remembered asking Sr. Rita if I could have the lids from the canned food we were being served. I remembered how I would write numbers and words on the lids with magic markers and play the memory game. We used to play with cards but we lost some of the cards. To play, you turn all of the cards (or lids) face down and start selecting two objects and turn them over. If they match, you get to keep them and get another turn. If they don't match then you turn them over face down again and someone else gets a chance to match.

With these memories in mind, I made this set of Canning Lid Memory games. Since the lids are used for canning, there are no sharp edges to hurt the children. I simply cut circles out of patterned scrapbook paper and glued to to the depressed area of the lid. (I am sure that you can use a circle punch or even round stickers to make it easier).

The first set was simply based on colors (see above). The only stipulation is that you need to have an even number of lids with the same color. 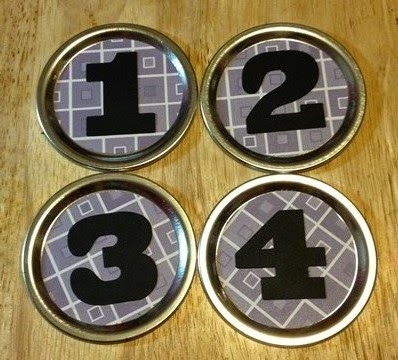 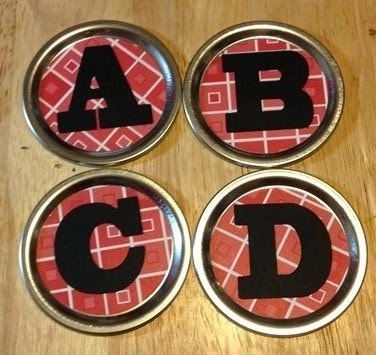 All in all, this project didn't take long at all to complete.
Posted by Dr. Russ at 1:00 AM 1 comment:

Today, we return to the alphabet series

This is the last in the Black Envelope/metallic pen series. I have Purple and Navy Envelopes planned for later in the year.