Blue. I'm so BLUE. Not really but this challenge really challenged me. It wasn't that I had a dearth of ideas but I had so many that I couldn't decide and ended up wasting a couple of days trying to decide. The challenge became even more difficult in that I decided to continue on working on blocks for a future quilt.

These blocks were dedicated to logs (rectangles) and points (triangles). The points almost made me jump off the George Washington Bridge.

The design that I have been most enamored have been the log designs. I tried them in a larger (thicker) format but decided to try to do narrower rectangles to work on my seam allowances. With the larger rectangles, you have a lot of room for error. On narrow rectangles, much less so. The reason that I like the pattern so much is because there is less pre-measuring. You simply sew two sides to the length of the current side and then cut the opposing sides to the added length.

Although there is less blue here, I did feature the color in the design.

The second pattern featured rectangles, squares and triangles. In this example, I tried to work on the triangles meeting the points of the squares. I loved the blue against the red. As you can see, I ran out of the grey striped material and had to piece one side and it made it wonky in the process--LOL. You live and learn. 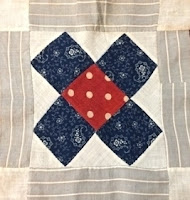 The third and fourth patterns really featured blue and POINTS. The classic star pattern proved to be most difficult and that I had to start and restart several times. As you can see, some of the points matched up better than others. I do love the two shades of blue and the pattern on pattern. 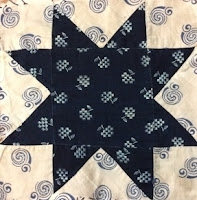 The final pattern made me dizzy in the process. I don't know the name of the pattern but I got so confused and at times couldn't remember where I was in the pattern. I think that this would be equivalent to a knitter losing count during a stitch pattern. On a larger scale, I think it would be too busy. Once again, sometimes the points met and sometimes they didn't. 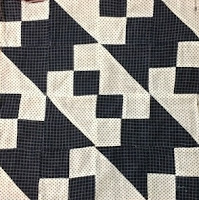 One of my biggest regrets is that I don't have a washing machine. Therefore, I have to wash all of the material by hand, let it drip dry, and then sew it. The I have to repeat the process with the finished square and iron it.

So, hopefully I met the Blue Challenge even though it turned me blue in the face. When I worked with Isaac Mizrahi, he told me that he learned more about sewing from taking things apart than sewing them together. I never understood what he meant until I started these quilt blocks.

Oh, first of all, you worked with Isaac?! There has to be stories there!

I think your points look pretty good, at least in the photos. It is just a fiddgity process.

Yeah, Isaac was approached by Target to work on a line of stationery. He and I worked on the development and presentation of it.

Oh, I knew he did different lines for Target, but I never knew you worked with him. How awesome is that.